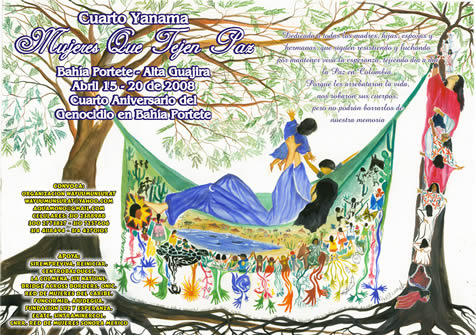 WAYUU SOLIDARITY CAMPAIGN: We just returned in April from a visit to the Wayuu indigenous community of La Guajira, Colombia, for the Fourth Yanama: Women and Territory. This community suffered a massacre at the hands of paramilitaries and Colombian military on April 18, 2004. For the last three years, BRIDGES has hosted North American solidarity tours by Debora Barros Fince, Founder and Director of Organizacion Wayuu Munsurat and international spokesperson for her people of Bahia Portete, who now live in exile in Venezuela. We hope to host Debora or another representative again this fall.

Our little BRIDGES delegation to the Yanama was a diverse group, including three of “our girls” from various regions of Colombia along with our USA contingent and even a Yaqui woman from Sonoras, Mexico. We went to participate in a temporary re-occupation of Bahia Portete to honor the dead and assert the Wayuu people’s right to a peaceful return to their ancestral homeland. Invite us to speak with your group or class and give a visual presentation of our remarkable journey. We are exceedingly grateful to the RESIST Foundation for their $1,500 grant in support of our international solidarity work here in the U.S.